American Plains Artists 30th Annual Exhibit, Art of the Plains Sculpture Award 2015
My Sculpture, Marbled Godwits, has been selected for the sculpture award in the American Plains Artists exhibit.  The exhibit is at the Great Plains Art Museum in Lincoln, Nebraska, from August 7 - October 24, 2015.
Allied Artists of America 95th Annual Exhibition Gold Medal of Honor Winner 2008
My aquatint etching, 'DeWinton's Pool', has won The Allied Artists of America Gold Medal of Honor. According to Allied Artists president, Thomas Valenti, this is the first time in the organization's ninety-five year history that the Gold Medal has been awarded for an etching. DeWinton's Pool is on Quebec's Grande Cascapedia River which still has some of the best salmon fishing in the world. The pool is named after the Prince of Wales' Private Secretary who fished there in the early 20th century. The 95th Annual Exhibition was on display at The National Arts Club in New York City, from November 14 - December 2, 2008. 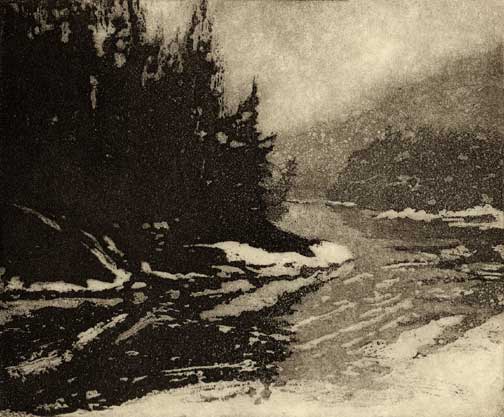